byssinians are elegant cats of medium size, defined musculature and short coat. Among their main characteristics are their agility, intelligence and their need for affection from their owners. They are very active so they need high spaces to climb.

They integrate easily in families with dogs, but not with other felines. 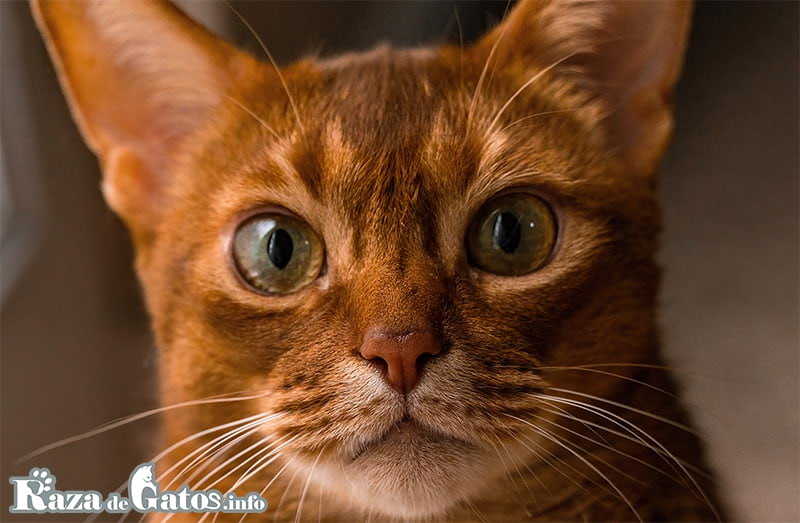 All about the Abyssinian cat:

Its origin is unclear, although the vast majority of experts believe that they come from Abyssinia, present-day Ethiopia.

It is likely that it was brought in 1860 from Abyssinia, by personnel of a military expedition on their return to the United Kingdom. There they were crossed with British shorthair cats and Oriental breeds. It was the English who started the Abyssinian cat catteries and were in charge of refining the breed.

It is worth mentioning that the Abyssinian cat has a wild African ancestor and has a similar appearance to the mummified cats found in Egypt.

Since 1970, litters of Abyssinian long-haired kittens have been included in a new breed called Somalian, “the Somali cat”.

They are one of the most popular breeds in the world, due to registered births. 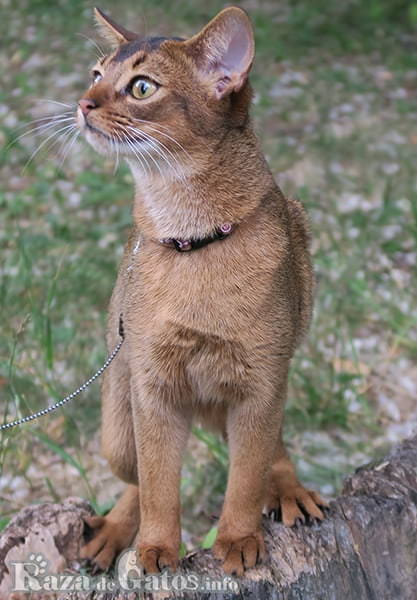 Abyssinians are elegant cats of medium size, defined musculature and short coat. Among their main characteristics are their agility, intelligence and their need for affection from their owners. They are very active so they need high spaces to climb.

They integrate easily in families with dogs, but not with other felines.

Abyssinians are medium-sized, sophisticated-looking felines. Females are smaller than males and have a fine bone structure.

Structure: Wedge-shaped, i.e. almost triangular but not exaggerated. It should have rounded contours and a firm chin.
Ears: Large, broad based, rounded at the ends and open upwards. Coat short and with a small tuft similar to the lynx.
Eyes: Large and expressive, almond-shaped. They can be golden, copper, green or hazel.
Muzzle: Short and protruding slightly in line with the head, when viewed from the side or front.

The Abyssinian cat is very active, especially the female, so it will demand our attention and affection at all times, as it is not a solitary cat. It is curious and intelligent, a good climber and playful, but also thoughtful enough not to be reckless.

He does not like solitude, so he will always prefer to be in the same room as his owners. It is a cuddly cat that will be fond of the whole family, and even dogs, but not so with another cat. Especially if the Abyssinian is a female.

She can live in an apartment, as she is not used to roaming around. Although it will explore every corner of your home and watch out the window.

It is also a great climber, so keep in mind that it will love high places (furniture, shelves) and green spaces with trees. 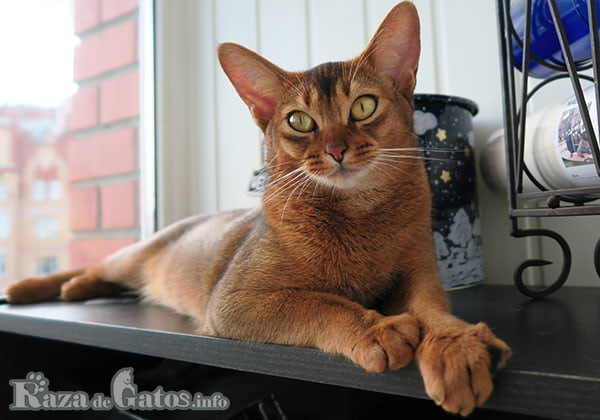 There is a hereditary disease (of recessive character) that this breed can develop, called pyruvate kinase, and consists in the lack of this enzyme, which generates pictures of anemia. There is a test to detect this disease, so it is important to find out before acquiring a specimen, that the breeder (or kennel) has done it.

Another fact to take into account is an ocular problem called progressive atrophy of the retina that causes blindness. Also, as in many other breeds, there are cases of kidney failure, joint problems and even neurological problems.

Requires a diet based on abundant protein.

To avoid hereditary diseases, it is necessary that the cat be acquired from a professional breeder and provide the necessary documentation or pedigree. For example in the case of herediratia pyruvate quinosa disease, being recessive, the cat could present the genes but not develop it. But if two cats carrying the gene are crossed, the offspring will suffer from deficiency of this enzyme. A responsible cattery should have this information when performing the health examination.

It is recommended at least once a week. Its short coat is easy to care for. Enjoy combing and brushing.  By doing this practice several times a week, it will eliminate the weakened hair and help to keep it clean and above all with the shine that characterizes its coat. Another tip to achieve a unique shine is to massage it gently with a damp chamois cloth.

Every 15 days you should cut the tips of his nails, especially if he is not in continuous contact with the outside.

As for the care of his eyes, they should be cleaned with a soft, damp cloth or wipe once a week.

Like all breeds of cats, it is also necessary to perform annual controls, anti-parasite control and periodic vaccinations.

The Abyssinian is one of the oldest breeds and was given that name in the exhibitions that took place in the United Kingdom in the 19th century. They thought that they came from Abyssinia, today’s Ethiopia.

Another interesting fact is that an Abyssinian cat starred in a Disney movie “The cat from outer space” filmed in 1978. The main character is an alien Abyssinian cat, whose name is Jake. He has to make a crash landing on planet Earth and meets a secret organization that wants to capture him.