The Burmese cat is a breed that originated between the borders of Burma and Thailand. It shares many similarities with the Siamese, both in features and in personality, but with a flattened face, slightly set eyes, and fur in various shades of brown. 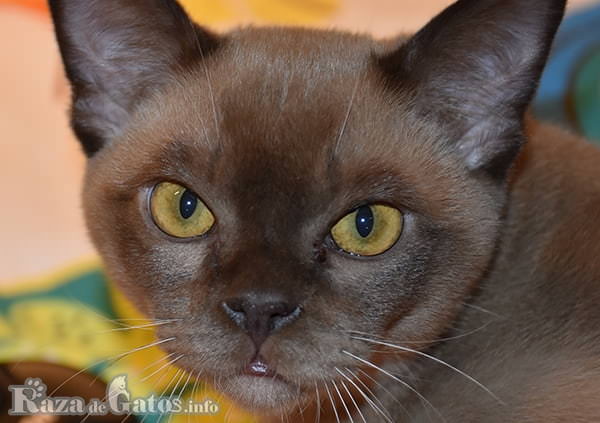 During 1930, in San Francisco, United States, Dr. Joseph Thompson imported a brown kitten from Burma, named Wong Mau, and noted that it was different enough to the Siamese cat. So he considered that said race had great potential to become a separate race.

On the other hand, both in Burma and in Thailand, they were already very old cats. But it is not known exactly how it originated.

It is said that, in 1871, a cat show was organized at Crystal Palace. There was exhibited a breed very similar to the cat Tonkinese modern. They were Siamese cats that closely resembled modern American Burmese cats in their features. This breed was the product of crosses between Siamese and other domestic cats, which they called Chocolate Siamese (Siamese chocolate).

Currently this breed of cats is recognized by many feline associations, including: TICA, CFA, WCF, and FIFe. 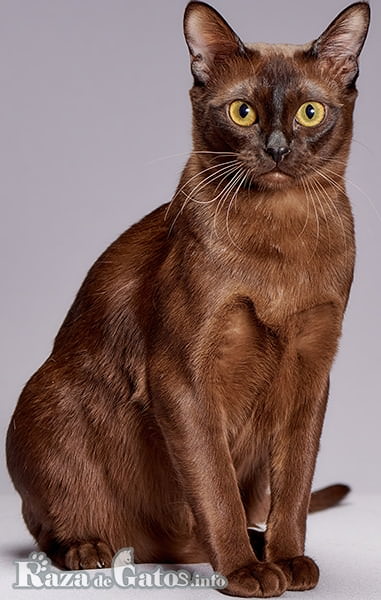 The Burmese is a remarkably robust cat for its size. It has a flat snout, broad head, slightly spaced eyes and short fur, in different shades of brown.

It is a feline that is characterized by forming strong bonds with its owner and constantly attracting his attention. It has many personality similarities with the Siamese cat, so its meows especially (in periods of heat) will cause us some headaches. Although their voices are sweeter and softer.

Burmese cats are good climbers, they love high places to play and jump. He is a very affectionate kitten who loves to be cuddled and close to his master. They often like to be around other Burmese cats, but not so much other breeds.

The Burmese cat does not present common diseases. In the same way, it is advisable to make periodic visits to the vet.

Being a robust cat with palpable muscles. Their diet must be taken care of so that they do not develop obesity, as well as having spaces so that they can do physical activities.

It is recommended that in the first 12 weeks of life, the Burmese kitten be with his mother and brothers, so that he learns everything he needs from them. After that time, he will only be able to join his new family with humans.

It does not require much care, since it has a short and fine coat. A weekly brushing will be more than enough to keep their coat soft and shiny.

♦ Curiosities of the Burmese:

A new color mutation called "Russet" appeared in 2007 in New Zealand. When kittens of this variety are born they have a dark brown pigment, which fades to an orange color as they grow older.