The Altai cat is a breed that is only a few years old, but which is gaining more and more notoriety, due to its striking blue eyes and the variety of colors that its fur can present, such as tabby or black among others, which are far from the typical white cats or the point pattern with blue eyes that we know. 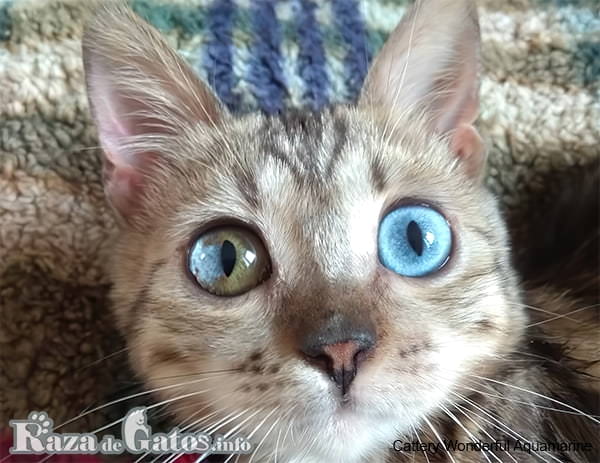 All about the Altai Blue Eyes Cat:

The Altai is a breed that caught the attention of cat breeders a few years ago. It is characterized by having blue eyes combined with coat colors such as black, red, brindle or tortoiseshell. This phenomenon is the consequence of a natural mutation, whose gene is dominant.

The first kitten with these characteristics appeared in the city of Ust-Kamenogorsk in 1995, it was a black cat named Fyodor with blue eyes and a white tail tip; whose phenotype resembled the American Blue Eyes discovered in California.

The first breeder of the breed of these cats was Zikeeva LB. Who noticed blue-eyed cats on the street and decided to investigate the subject. Lyubov Borisovna Zikeeva communicated with the owner of Fyodor, and from him began the creation of the blue-eyed Altai breed, which continues to this day. After many unsuccessful matings, Zikeeva finally got the birth of a blue-eyed cat named Ariel, who is considered the progenitor of all Altai cats.

The breed received its first certificate in October 1999 and for which the corresponding registration was made in the register of new breeds and colors of cats by the Breeding Commission of the SFF.

The blue-eyed Altai cat gene, like the breed itself, is confused with the Blue-eyed (American) cats. But they are two completely different genes that originated on different continents of the world. Unlike the American breed, Altai cats do not have physical deformities associated with the mutation. 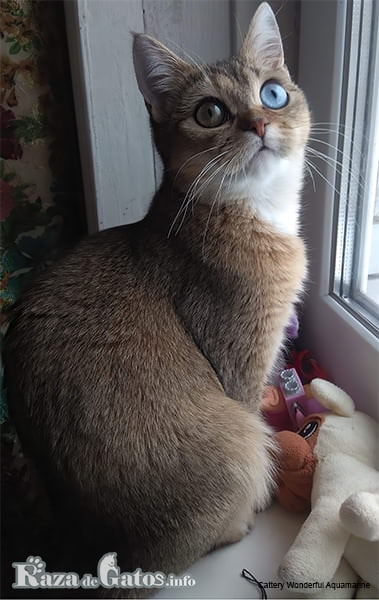 The Altai cat has bright blue eye color that is combined with coat colors that are not white or point.

They are friendly and affectionate cats with people, especially with their owners. They are characterized by being an active and energetic breed, who are interested in everything that happens around them.

They adapt well to their environment, they do not require additional space to live together. They get along well with other animals and easily tolerate their presence. 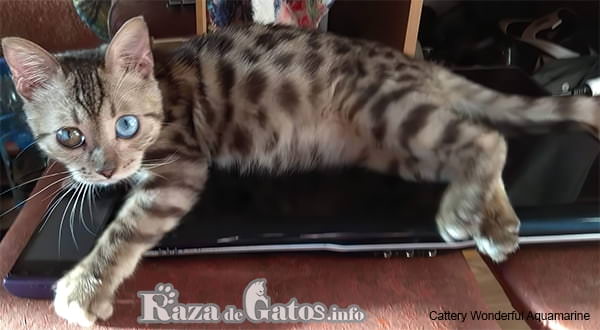 You cannot cross two Altai cats that have blue (or different colored) eyes, as this produces a deaf offspring with a white coat, as the blue-eyed gene is dominant. Therefore, mating of blue-eyed Altai cats is allowed only with non-blue-eyed (preferably green-eyed) Altai cats, in order to obtain healthy and strong offspring in this way.

A balanced and balanced diet.

Its coat does not require special maintenance. A weekly brushing is enough to keep it smooth and shiny.

Cats that are “not white or point” and that have blue eyes were discovered in almost diametrically opposite regions of the world, on the one hand, we find the California Blue Eyes and the Kazakhstan Altai Blue Eyes.

In both cases, the genes for blue eyes are of the dominant type, as well as, in both cases there is at least a small white marking, most often on the tip of the tail, but it can also be a white medallion, legs white hindquarters or a white patch on the face. Due to incomplete penetrance of the gene, the size of the white mark varies from a few hairs to a large white patch.